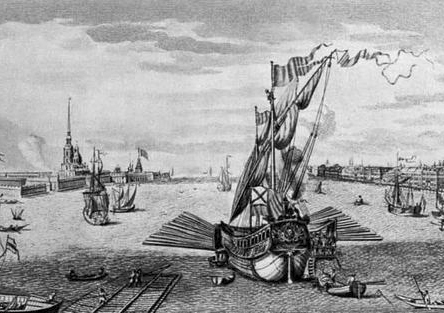 Baroque Ballet-Allegory The Union of Wind and Sea

Premiere of the Second Version

The 23rd St. Petersburg International EARLYMUSIC Festival will be largely in online format, supported by the VKontakte social network and the ‘Saint Petersburg’ TV channel. The Covid-19 pandemic has presented the Festival with a new challenge: to feature genuine works of art that are no inferior in quality to the standard normally associated with EARLYMUSIC, but in the virtual sphere.

However, live performance is the natural element of the Festival, and EARLYMUSIC would be unthinkable without it. Live performances of the new version of the ballet can be seen at the Hermitage Theatre on 10 and 11 October. Audience numbers will be restricted and the requirements of the Federal Service for Consumer Rights Protection and Human Wellbeing will be observed: staggered seating, wearing of masks and gloves, temperatures taken on entry.

On 11 October at 7pm the second version of The Union of Wind and Sea, produced especially for EARLYMUSIC 2020, will be broadcast live on the Festival’s group page on VKontakte (https://vk.com/earlymusicfest) and on the Internet resources of the ‘Saint Petersburg’ TV channel.

About The Union of Wind and Sea

In 1728 Count Nikolay Golovin, the Russian ambassador in Stockholm, commissioned Johan Helmich Roman, Kapellmeister at the Swedish court, to write the music for a ballet to mark the coronation of Emperor Peter II. Peter came to the throne on 6 (17) May 1727, but it is not known whether the dance music commissioned for the celebrations was performed. This valuable acquisition of the Russian court would certainly have been played at balls and in concerts – after all, Roman, a violinist and oboist, had studied in London and had played in the opera orchestra of George Frideric Handel himself. When he returned to Stockholm in 1721, he was dubbed the ‘Swedish Handel’. His ‘Golovinmusiken’ Suite consists of over forty dance numbers without a linking libretto or names of the dances. However, it should not be thought that it was purely concert music. Performers in the 18th century knew without special indications what to dance to a particular rhythm or a typical melodic pattern.

In 2017, thanks to the EARLYMUSIC Festival, Roman’s ‘Golovinmusiken’ was staged for the first time in the magnificent and integral form for which it was composed. The new libretto of The Union of Wind and Sea was written especially for the project by Klaus Abromeit. In 2020 the choreographer Konstantin Chuvashev, a disciple of Abromeit and leader of the ‘St. Petersburg Angiolini Ballet’, has created a second version of the production in which the principal role is played by our city – St. Petersburg.

Tickets for the live performances are available on the Festival website: www.earlymusic.ru

An online transmission can be seen on the Festival’s group page on VKontakte: https://vk.com/earlymusicfest

Shortly after the conclusion of the Festival a recording of the ballet will be available on: https://www.facebook.com/earlymusicfest and https://www.youtube.com/channel/UCiloTdCdln3cszAFwarui9Q